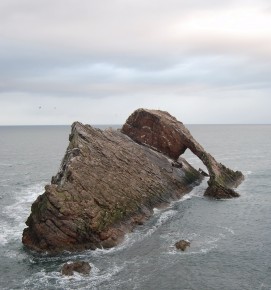 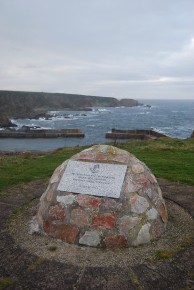 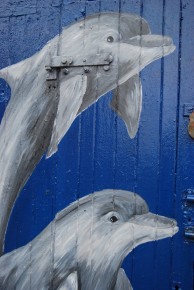 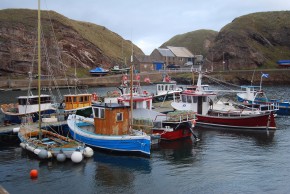 Portknockie is one of Moray’s coastal spendours. Perched on a cliff-top vantage point over-looking the Moray Firth and between Cullen and Buckie, Portknockie saw expansion in the 1800s when herring fishing in the area was at its height. Today, the harbour seldom gives shelter to the number of boats that it did then, but there are still fishing vessels there, some ready to sail, others being worked on and others that may never sit in the water again. Make no mistake though; Portknockie is a fishing village with a heritage. Wherever you look there are reminders of just how important fishing and the sea was and still is to this community. But don’t just take my word for it, if you’ve a mind and an hour to spare, take a walk round Portknockie and see for yourself.

Starting by the seating area adjacent to Admiralty Street, take a short stroll down to the Bow Fiddle Rock behind the workshops that overlook the rocky coast. The Bow Fiddle Rock is well sign-posted, take care on the path though, the drop down is quite long and dangerous. Seabirds swirl around this massive and distinctive rock, some may alight and if you are lucky you might just spot one or more of the Moray Firth dolphins making their way along the coast. The massive and distinctive Bow Fiddle Rock sits on the Moray Coast Trail, with its deep-water inlet through which rough or calm waters flow, but it’s the ‘bow’ that is the real draw – red, massive and very unusual in nature.

From this point walk along Patrol Road, passing Reidhaven Street and the beautifully renovated Sailwater Cottage and Rosemary Cottage on the corner of New Street. Hereabouts, many of the properties are traditional fisherman’s dwellings, some of which are gaily painted to add colour to the lives of those who live here. Continue on, noting the flat area opposite Victoria Street that was once a fish processing plant and then a cooperage where, barrels were made in the time honoured manner to hold salt herrings. On the corner of Patrol Place a little shed has been lovingly painted and depicts a seal, seagull and two dolphins; well worth a second look.

Turn along the coast road here and see the old Fisherman’s Hall. A large building, opposite Rock House, it was built for the Coal Society and it was from here that coal was once distributed. Keep on to the ‘Heid o’ the Brae’, overlooking the harbour and the memorial. This was once a greater gathering place than it is now. From here fisherfolk could look out for their own returning from the sea, discuss catches, the weather and the economic fortunes of the day. The harbour drops away from the village and sits below the fishermen’s monument that is complete with white anchor, seating area, flying flags and a stone reminder of the many who gave their lives to the sea in pursuit of its riches.

The Harbour has two distinct areas, one an inner and the other an outer harbour. The part nearest to the village has boats tied up; some ready to go out to sea again, others safely tied to avoid angry crashing waves. The outer, smaller harbour waits to welcome incoming boats and bid farewell to those leaving. It also has a small, shallow, distinctive blue paddling pool – presumably for the village youngsters, bounded by clean sand and filled with crystal clear water, perfect for warm sunny days. Creels and tackle sit safely on the harbour’s edge and boats in for repair sit on the tarmac awaiting attention. There’s no doubt that this is a perfect refuge for those home from the sea.

From this point walk on to Harbour Road passing Commercial Road. Here you hug, the coast looking out to sea. Hereabouts, are tiny cottages butted close together to afford protection from the weather and making for close-knit community ties. Easy-care gardens nurture plants perfect for the seaside environment, plants that will stand the rigours of salt and winter storms. Then walk on to Cliff Terrace and Pultney Street. The houses on the north side of Pultney Street were made of ballast stones brought from the Pultneytown quarry at Wick. It’s interesting to note that many of the stonemasons that Wick spawned moved as far south as Edinburgh in search of work, working on many of the capital’s buildings that can be seen today.

Follow the road round leaving the coast and passing the post-box in red and walk up towards High Street, join it and walk along. Here are many renovated properties, beautifully finished with pebbledash fronts and stone facings around windows and doors.

Cross over Hill Street and look left and see the bell atop the Church of Scotland. In the dark, the round window is illuminating when backlit and very beautiful. Carry on here, you can still see the sea to your left between the houses and yards, and drop down a little to the ‘Give Way’ sign.

Turn left to the War Memorial, a tall grey cylindrical memorial with a thoughtful young woman clutching a wreath seated on top. The memorial remembers the brave men of Portknockie and district who gave so much in two world wars. Although now long gone, streets of this area of Portknockie once housed all manner of village life including shops, a bank, Police station and shoemaker, all very necessary for those who lived and worked here.

Walk on down Bridge Street adjacent to the memorial but first have a glimpse down Park Street to the sea; it’s beautiful. Pass the chip shop and sample its wares if you’ve time, I would, the smell emanating was fantastic. In front of you are the Seafield Inn and its neighbour, The Victoria Hotel, built in the 1880s for tourists that arrived courtesy of the newly built railway of the time.

You are in the old square now with history all around. You can either re-join Reidhaven Street here and make your way back towards the Bow Fiddle Rock where you began – it’s signed from here by a tall black sign post, or linger awhile as I did, imagining the fisher folk of years ago bustling along and it’s not difficult to do.

Tiny broken framed windows on outhouses and narrow sheltered ginnels or more correctly ‘slappies’ between house walls, tell their own stories. As do steep steps, up which fishing nets would have been taken. Contraband and gossip may even have been passed from hand to hand here and the clip-clop of horses’ hooves could well have sounded out while bringing goods in and out of the village. Not to be forgotten are the fisher-women who gutted and cleaned the fish, before setting out to walk miles inland, selling the catch of the day to those who welcomed their arrival.