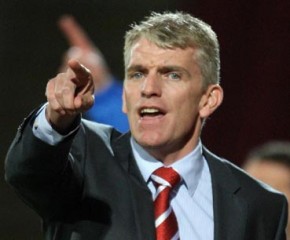 We would like to welcome Jim Weir as first team manager of Elgin City F. Jim made his first appearance as manager on the 2nd December 2014 and played in the senior Scottish leagues for Hamilton Academical, Hearts and St. Johnstone. Since retiring as a player, he has worked as manager of Montrose, Arbroath and latterly - Brechin City. We wish him all good fortune at Elgin City and hope he will find a warm welcome in Moray. Up the Black and Whites!

ELGIN City Football Club was formed on August 10, 1893, when Elgin Rovers and Vale of Lossie amalgamated to form the new club and they played their first competitive match on October 7 of that year.

Borough Briggs is the name of their the home ground and Elgin City F.C. currently play in the Scottish League Two. Borough Briggs opened on 20 August 1921 when it replaced Cooper Park as Elgin's home ground and has a capacity of 4,520; (478 seated). All 478 seats in the main stand were formerly fixed at Newcastle United's St James' Park ground!

When Elgin City were elected to the Scottish Football League in 2000 they obtained 500 seats from the Geordie club when it was revamping the seated areas in its main (Milburn) stand.