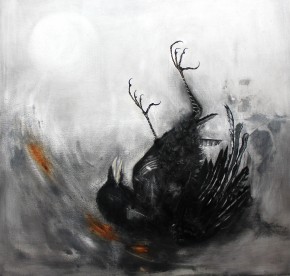 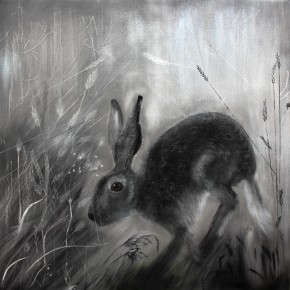 For many years my work has focused on what we humans refer to to as the natural world. Initially my paintings were figurative and were largely concerned with replicating details from a wide range of species from flies and fish to mammals. However I came to realise through study and practice that I was motivated and inspired to focus on creatures and their habitats, such as the nests they built or the fields they ran through, not simply because of their physiology, but because of the feelings of awe that their sometimes fragile and miraculous forms invoked in me.

We live in an anthropocentric world. My work explores the existence of kindred beings and their habitats commonly described as nature or wildlife. As an artist and as a human being I have regard and mutual respect for all creatures that participate in the way of the world. This allows me to view nature, not as a background but as a vibrant and dynamic force connecting and involving us all.

I am constantly struck by the astonishing formation and construction of a nest; such architecture undertaken by sometimes tiny creatures, often situated in a precarious position. Gathering used nests at the end of the season for my research I am often made aware of the absent presence of the creatures that built and occupied the structure, and of the force of nature designed to preserve the species. This was something that was particularly poignant when I visited Spynie Loch where Grey Herons build their nests on the top of the tall trees. Unfortunately many fledglings fall from their nests in high winds. I am currently working on a painting (early stages not yet available to view) inspired by a pair of Osprey’s I saw when visiting Loch of the Lowes in Highland Perthshire. These truly remarkable birds fly all the way from South Africa each year to build their nest and raise their young. Truly inspirational.

I currently use a monochrome oil painting technique whereby I apply pigment to a primed surface and then remove varying degrees of pigment to achieve light and detail. I cannot fully explain my passion for monochrome work. There is something about monochrome that really works for me. My recent work has included small areas of colour which I hope to build on in future paintings, and which does not detract from the overall monochrome effect. I am also gaining some experience of sculpting with Illona Morrice at her amazing studio sculpture workshops. The Ptarmigan piece is I hope the start of yet another creative path.

In 2015 I gained a BA (Hons) in Fine art at Moray College. Since that time I have worked at the WASPS (Working Artists Studio Provision Scotland) located in Fishertown, Nairn. Some of my work can be viewed at the studio open weekend on the 16th and 17th September between 10am and 4pm. Additionally my work can be viewed at the lovely ‘Wee Gallery’ in Cullen. See their website for opening times. I am also participating in the art exhibition to be held at the Court House, Nairn as part of the Nairn Book and Arts Festival which runs from the 12th until the 17th September 2017. It will be a great festival and I hope to see some of you there.