Fine Dining on The Move 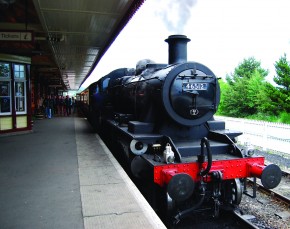 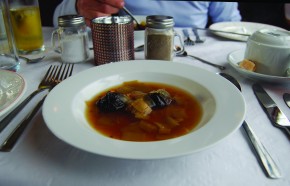 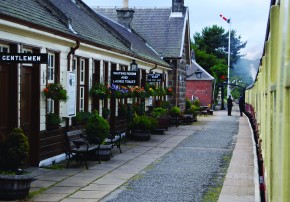 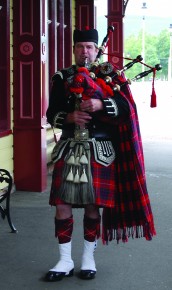 We all like to eat out now and again, but if you want something totally different then how about fine dining while on the move? Strathspey Steam Railway offer just such an experience and, for the foodie who loves train travel, this is certainly a real treat to savour.

Celebrating a family occasion by having an evening meal on the Aviemore line was a long awaited pleasure. Four courses were on offer, all we had to do was choose. Starters were ‘Auldreekie’, a delightful chicken and leek soup first created in Edinburgh, prawns with smoked salmon or Pudding BonBons – breaded black and white puddings and haggis to you and me, then followed a raspberry sorbet. The main course consisted of Balmoral Chicken in peppercorn sauce, an Eight Hour Roast Beef with all the trimmings, more salmon, roasted Belly Pork or a Baked Butternut Squash vegetarian option; all presented with a garden crisp panache of vegetables and potatoes. Sti cky toffee pudding. Apple granola crumble or traditional Cranachan with tea, coffee and tablet rounded things off . We duly made our choices and emailed them to the Steam Railway in advance as asked to do.

For those who prefer, there is a traditional Sunday lunch opti on which sounds good too, but be sure to check dates if you fancy going along, as these services are only offered during certain ti mes of the year and on certain days of the week.

The Strathspey Railway is a vintage railway. For our purposes the train departed from the Aviemore station, travelling through Strathspey, stopping at various viewpoints along the way with the Cairngorm mountains as a backdrop. On arrival at the station we were piped aboard and although formal dress is not required, many who choose to travel and dine in this way, do take the time to don suitable attire. A member of the train staff welcomes diners and showed us to our table, wine list in hand, allowing us to choose our evening drinks; both alcohol and soft drinks being available. As we waited for our evening to begin a steam train passed by the window and ‘our’ piper, resplendent in full Highland dress, entertained diners as we waited for the train to draw out of the station.

A quick look round and it was obvious that this is a popular venue for dinner; all the tables were fully booked, two to a table and we diners chatted as the train doors slammed shut, the whistle blew and the train moved smoothly off . Of course, if you are going to do fine dining on a vintage railway then you want it to be on a real steam train. Ours was The E.V. Cooper Engineer, big, black and beautiful with a funnel that poured out steam and of which Thomas the Tank Engine would have been proud.

Warm bread rolls were served to us as we left the long platform at Aviemore, while a diesel engine rolled past on the other side of the track. Passing the first road crossing the whistle blew, reminiscent of the Railway Children, complete with the smell of cordite. It certainly made for a wobbly eating experience as attentive staff brought jugs of water and glasses for each table.

From our window vantage point beautiful hill, heather and mountain views passed by alongside the track. Left to its own devices the moorland here would soon become forest, but grazing by deer and the occasional fire keeps the trees away. This is an important place for wildlife, wild flowers, insects and birds and one through which the Speyside Way also passes. Other parts of our journey included birch woodland, where both birch and pine give shelter to native red squirrels and deer and form part of a forest that is the largest area of native woodland in Britain. Our starters arrived at this point and the train came to a halt for us all to eat. We’d chosen the soup and I’m pleased to say it was delicious and completely different to anything I’d had before; prunes, chicken and leeks in a light, spicy almost clear soup. The prawns were a feast for the eyes and everyone ate in an unhurried manner thanks to the well-polished table service. With another whistle and a hiss of steam we were off again, slowly and elegantly, there’s no rush on this train.

Looking around the dining car it’s rather reminiscent of how you’d imagine the Orient Express to be, a wooden panelled dining car, subdued lighting with tassel trimmed curtains at the upper sliding windows, comfortable seating and wonderful views from the windows. As we watched, the quaintly named Woodcutters Cottage came into view, the walls of which are remarkably made from railway sleepers. Shortly after, the houses of Boat of Garten filled our view and here we stopped to appreciate the lovely pink cherry topped sorbet, of which, I must admit, I could have eaten second helpings, so good was it.

The station at Boat of Garten is home to a variety of railway carriages, railway paraphernalia and memorabilia, which gave us plenty to look at while the waiters and waitresses worked hard all around us. The train is also topped up with water here and, if you are quick, you can get off to watch the procedure as a huge tap with a hose like an elephant’s trunk comes into play.

Whilst waiting at the station our main course was served. As we left with black smoke emitting from the funnel of the train, we tucked into beautiful Eight Hour beef with Yorkshire pudding, baby corn, mange tout with just the right amount of gravy, delicious. Cattle grazed the fields as we rolled along and we could see the River Spey before we drew into ‘Monarch of the Glen’s’ very own Broomhill station, where the Glenbogle sign still sits. Here Archie and his family, of TV fame, regularly took their leave, or returned, when coming or going to far flung places. For us though it was time to watch the big, black steam engine pass the carriages while going to the other end of the train, enabling us to be pulled back along the line the way we had arrived. Several diners alighted to watch the goings on. Passengers made up of visitors to the area and locals, all of a certain age, had steam as their interest.

May be it’s something to do with the slow, steady pace of this kind of travel or the memories it holds that draws those who have embraced this dining experience together. Whatever it is, it’s their love of steam that had them all chatting like old friends for a while. It’s an altogether harder climb for the train as it leaves Broomhill heading for home, the engine can be heard toiling and chugging. Steam blows back past the carriage windows reminding you, if a reminder was at all needed, that this is indeed steam travel at its best. Heading home with puddings and teas and coffees before us, as the subdued lighting came into its own, was a delightful way to end a perfect and altogether different dining experience. Replete and with the rolling motion of the train and the noise of it going along the tracks lulling us along, we finished our journey, drew back into the station at Aviemore, thanked our hosts for the evening and headed homeward.

If you’d like to know more about dining with the Strathspey Railway see www.strathspeyrailway.co.uk or contact them at the Aviemore station.