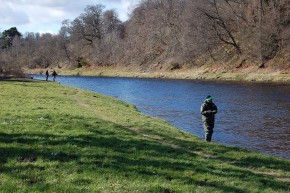 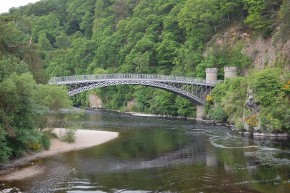 My original intention was to call this a walk ‘around’ Aberlour, but on reflection I decided that a walk ‘to’ Aberlour from its neighbour Craigellachie was probably a better idea. In truth though the walk could also have been called ‘The Three Bridges Walk’, for that’s what you’ll see if you follow this walk; the world famous Telford Bridge at Craigellachie and two smaller bridges, the Victoria Bridge and the Pack Horse Bridge, both at Aberlour.

It’s a toss up as to which is the prettier village, Craigellachie or Aberlour, I suppose it depends on personal preference. Both have hotels, shops; although Craigellachie’s are more limited, schools, post offices and petrol stations. Aberlour is the bigger of the two and the railway has in the past served both villages and for our purposes it’s the railway that links them and along whose path we’ll follow.

Park first in Craigellachie. You can either park in the village itself or on the other side of the main road close-by Thomas Telford’s Craigellachie Bridge. Wherever you choose to park take a closer look at the bridge, people come from all over the world to see it and it’s photographed almost on a daily basis. Weddings and other important gatherings take place here and it’s featured annually on calendars. The bridge changes with the seasons and the weather. It looks spectacular surrounded by the autumnal colours of the trees and, perhaps, even more so when sparkling winter sunshine illuminates the snow. It is though, a tough place to be when the river’s in full spate, if the waters rise, the sandy beach where children play and dogs chase sticks in the summer, disappears under a raging torrent that you’d do well to avoid.

From the bridge take the path under the newer road bridge that gives you access to the tennis court area. Walk towards the Highlander Inn and, at the back of the Inn, turn right to pick up the Speyside Way. It’s a relatively narrow path, well used by walkers, cyclists and horse riders on occasion, make sure that you allow for other users and stop or move over when necessary. Locals sometimes use this path too to move between the two villages, so don’t be surprised to see people pushing buggies or runners on here. The path meanders gently up and down alongside the river for the most part. You can see it quite well from here and you’ll also notice many relics from the railway that once used this route. The largest relic comes quite soon after leaving Craigellachie by way of the old railway tunnel. It’s long and on dull days can seem very dark once you reach the middle, if you venture along it in the evening do take a torch. Small children may need their hands held until you reach the other end where you’ll see the welcome sight of the Spey once again.